There is a perception that the NBA Playoffs can occasionally be a touch predictable. The NBA Playoffs involve a progression of best-of-seven series, unlike, say, March Madness, when the single-elimination tournament element makes each game feel like it's a do-or-die contest. In a best-of-seven, the superior team typically prevails, regardless of how many crazy things occur along the way.

There's a little chicken-or-the-egg logic to that predictabilityץ. For example, Michael Jordan reached the NBA Finals six times during his career and prevailed in each of those series. History has made such victories seem obvious, but as you will discover if you keep reading, there were a few instances when things were a lot more uncertain than you may have imagined.

It's surprising how many times Michael Jordan made the right decision by deferring to teammates rather than forcing shots himself during pivotal moments in NBA Finals history.

Jordan drove into the paint with the 1997 NBA championship on the line and tossed the ball out to Steve Kerr, who made a 15-footer to earn the Bulls their second consecutive NBA championship. This shot stands out because of Kerr's ability to not only make the shot but also spot free space when the Jazz's defense was focusing on Jordan. Who would have imagined that Kerr, not Jordan, would lead the formidable Bulls to victory in the 1997 NBA Finals? 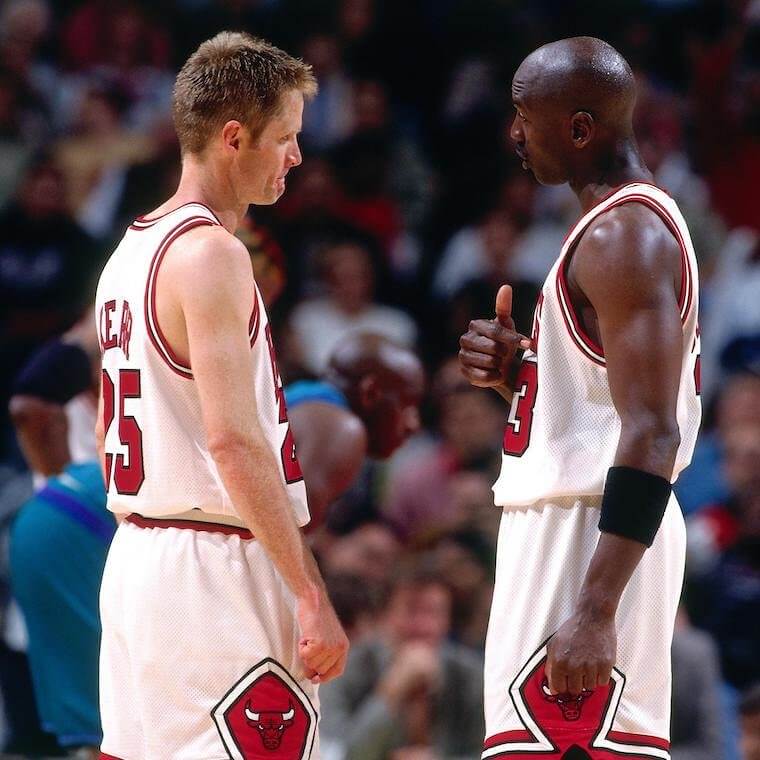 Screenshot
This play demonstrates that it's never a terrible idea to give the ball to teammates who can make shots.

It's amazing that Johnson was the one to make this game-winning shot in a series that was so singular for Isiah Thomas's dominating performance.
The finest thing about "The Microwave"'s game-winning shot in extra time is that he had the opportunity to give Thomas the ball back but chose to keep it instead. Johnson's ability to perform in pressure situations is one of the reasons his jersey number 15 will forever hang in the rafters of the Palace of Auburn Hills.

In game 6 of the 1993 NBA Finals, all nine of the Bulls' points in the fourth quarter had been scored by Michael Jordan, but none of those points were as significant as the three that John Paxson was about to score. 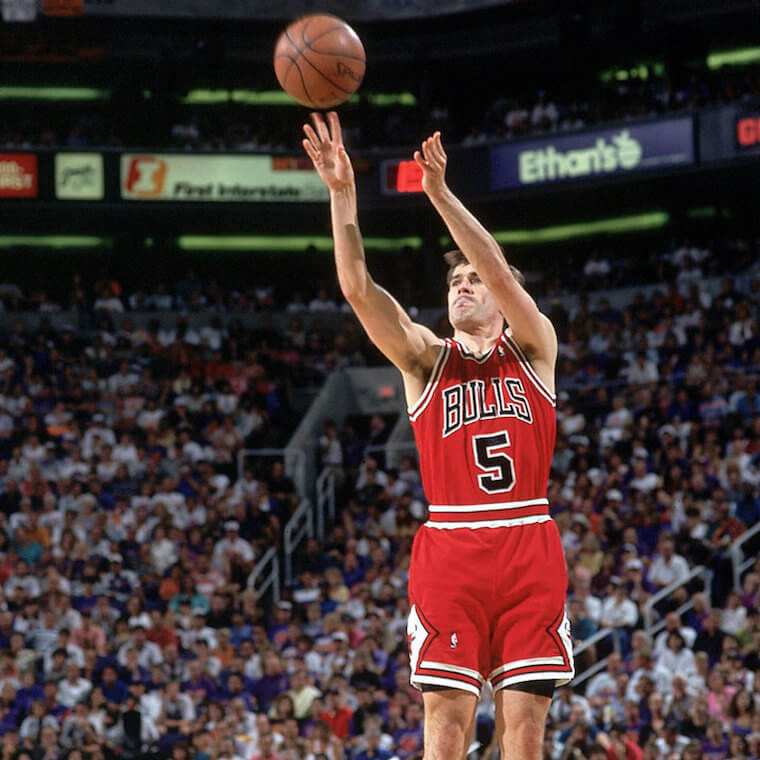 Screenshot
With less than 15 seconds remaining and the team down by two points, Scottie Pippen drove into the lane and tossed the ball to Horace Grant, who then threw it to John Paxson on the wing. With only four seconds remaining, Paxson, who had ice coursing through his veins, knocked down the three-ball to help the Bulls win their first of three consecutive championships under Michael Jordan. With this shot, a lot was on the line, and Paxson more than lived up to the challenge.

Robert "Big Shot Rob" Horry is used to being in tough situations. Throughout his career, he has made baskets that have won games for the Rockets, Lakers, and Spurs. But none were more significant than the shot he made to win Game 5 of the 2005 NBA Finals against the Pistons.

Horry drove and slammed down a huge dunk with less than two minutes left in the game to cut the Spurs' deficit to one point. With only six seconds remaining, Horry followed that with an extraordinarily crucial three-pointer. With the game-winning shot, Horry cemented his reputation as one of the game's greatest clutch performers.
Oh, and Horry performed all of that while dealing with a shoulder injury. The greatest clutch player in NBA history? Possibly.

That Magic Johnson baby sky hook is unquestionably one of the most iconic moments that comes to mind when you think of the thrilling Lakers vs. Celtics NBA Finals of the mid-1980s.

The Celtics had to win Game 4 with the Lakers leading the series by two games to one, but Magic had other ideas. Magic, whose team was trailing by one point, passed up a jump shot and executed what he called a "junior, junior sky hook" in an attempt to channel his teammate Kareem Abdul-Jabbar. 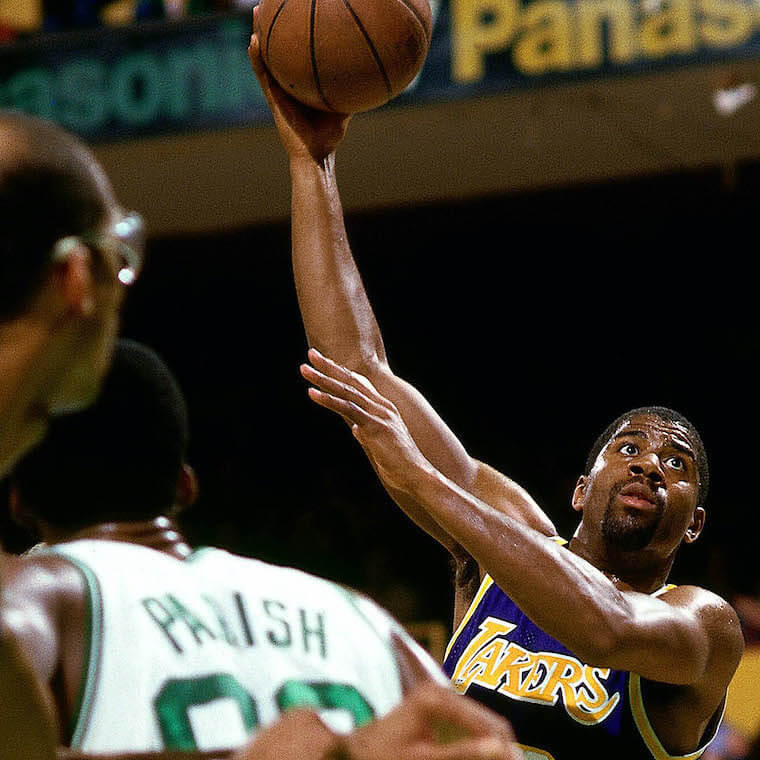 Screenshot
Kevin McHale, Larry Bird, and Robert Parish were all in the way of Magic's hook shot when it was made. Yes, it doesn't get much more crucial than that, especially when you're an NBA Finals point guard using a sky hook to win the match.

In Game 6 of the 1998 NBA Finals, Michael Jordan defeated the Utah Jazz with a game-winning dagger to end his legendary NBA career with the Chicago Bulls.

Jordan's memorable last jumper gave him his sixth NBA championship and his second consecutive three-peat with the Bulls.
Aside from the fact that Jordan pushed off the defender with all of his might, there's no denying that it's one of the greatest clutch shots in NBA Finals history. It provided Jordan one more crucial moment that will go down in NBA Finals - and NBA - history.

Even though Willis Reed's inspirational Game 7 moment made the 1970 NBA Finals famous, the Knicks and Lakers' series that year also included the most crucial shot (or shots) in NBA Finals history.

It's unusual to see two clutch shots in five straight seconds, but that's exactly what occurred when Dave DeBusschere of the Knicks sank a jumper from the free-throw line with only a few seconds remaining to give the Knicks a 102-100 lead. 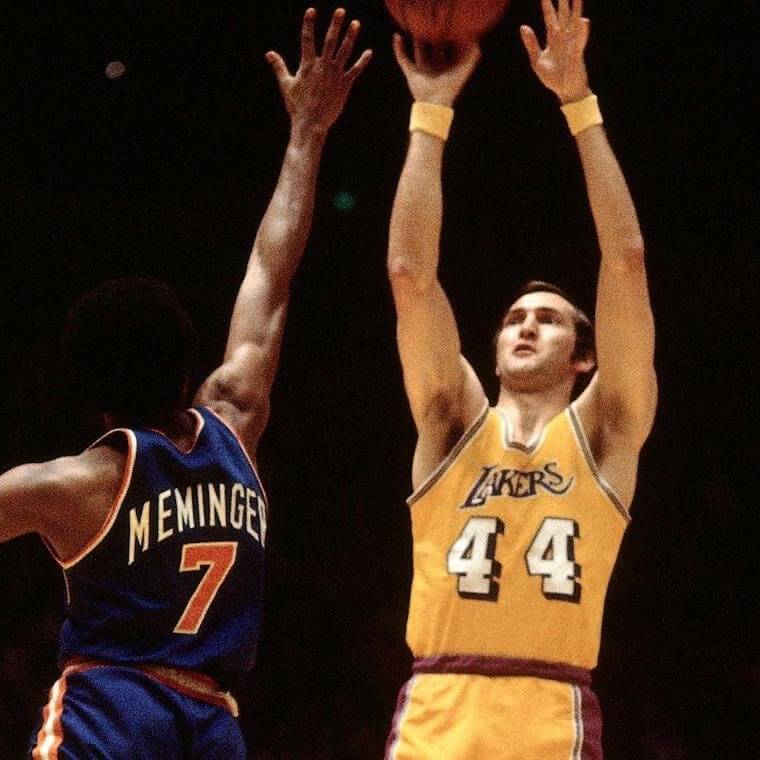 Screenshot
Mr. Clutch Jerry West, however, was having none of it. He seized the inbound pass and threw a 60-foot prayer that somehow, miraculously, went in, forcing overtime. West's 60-foot jumper remains the most crucial shot in NBA Finals history, despite the fact that the Lakers would ultimately lose this game - and the series.
✍ WRITTEN BY